You are in:  / Home  /  News   /  A Boy From Cameroon With Congenital Glaucoma, Cataract And Corneal Opacity Improves His Vision Thanks To Solidarity
ACTUALIDAD 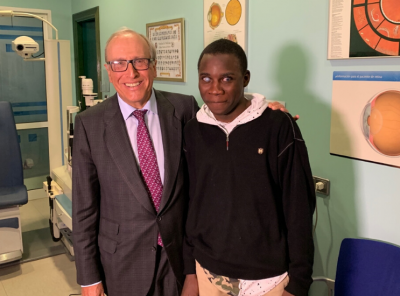 A Boy From Cameroon With Congenital Glaucoma, Cataract And Corneal Opacity Improves His Vision Thanks To Solidarity

The Fundación Fernández-Vega has collaborated with EDEA Camerún and Obra Social “La Caixa” to improve the quality of life of Fabrice Samuel Edwe, 16 years old, saving one of his two eyes that had been affected with glaucoma since he was born.

Fabrice Samuel Edwe, ‘Samu’, as he is affectionately known in Spain, is a young boy (16 years old) from Cameroon with congenital glaucoma – first cause of irreversible blindness in the world – who came for the first time to the Fundación Fernández-Vega when he was 10. Currently, after six years of treatment and several glaucoma, cataract and corneal transplant surgeries, he has been able to improve vision with his left eye.

During his first years of life, “Samu’s eyes” had been hurt and his vision had gradually worsened, says Nieves Lázaro, president of the Association of International Cooperation EDEA Camerún, who has accompanied and guided him at all times. After a long drive he reached the eye practice in Oviedo, where the medical director, Professor Luis Fernández-Vega Sanz, received him.

After assessing his case, Professor Fernández-Vega determined that it was worth fighting the blindness to which the boy seemed doomed. He put all the resources of the Fundación Fernández-Vega (FFV), the team of specialists and access to the most state-of-the-art treatments at the boy’s disposal, all of this under his coordination, from December 2013 until now, and it seems that this will continue for Samuel’s whole life.

Thus, the young Cameroonian entrusted himself to Dr Pedro Pablo Rodríguez Calvo, head of the Unit of Glaucoma of this practice, who was the first surgeon to operate on his left eye. As he didn’t respond to the initial pharmacological treatment, he underwent surgery with the implantation of a valve to restore the ocular pressure of the left eye, which at the time was over 50 mm Hg in each eye (normal values range between 12 and 22 mm Hg).

The opportunity that this specialist gave him to improve his situation came as a surprise to ‘Samu’. “It wasn’t the first time someone had said that they were going to do something for my eyes, I thought it was another unfulfilled promise,” he says moved.

To see light at the end of the tunnel

Throughout these six years, thanks to the on-going medical care of Professor Fernández-Vega and Dr Pedro Pablo Rodriguez, Samuel has been able to control his ocular pressure, which is now within normal values. The next step, in early 2019, was to undergo surgery in the Unit of Cornea and Crystalline of the Institute, headed by Dr José F. Alfonso.

The specialist highlights that ‘Samu’s’ case is very special, as “in our environment glaucoma is usually treated sooner and the prognosis is better,” but “the glaucoma surgery was a success and has enabled, once he has reached the appropriate age, to perform another surgery to improve his vision,” says Dr Alfonso. Thus he performed a corneal transplant and a cataract surgery with the implantation of a lent. With all this interventions, light has started to flow into his left eye and ‘Samu’ has started to distinguish colours.

In a recent consultation, Dr Pedro Pablo Rodríguez has been able to see ‘Samu’s’ eye fundus and has very good cause to be optimistic. There is damage to the optic nerve, but there are also healthy nerve fibres.

Samuel’s story started with eye problems, which he has overcome with the help of his mother and the many efforts of the Fundación Fernández-Vega, EDEA Camerún and Obra Social “la Caixa”. He now continues with his studies, which together with paint are his passion. “I was adamant to keep studying, I was very, very insistent on the matter,” acknowledges Samuel, who is now in Year 12.