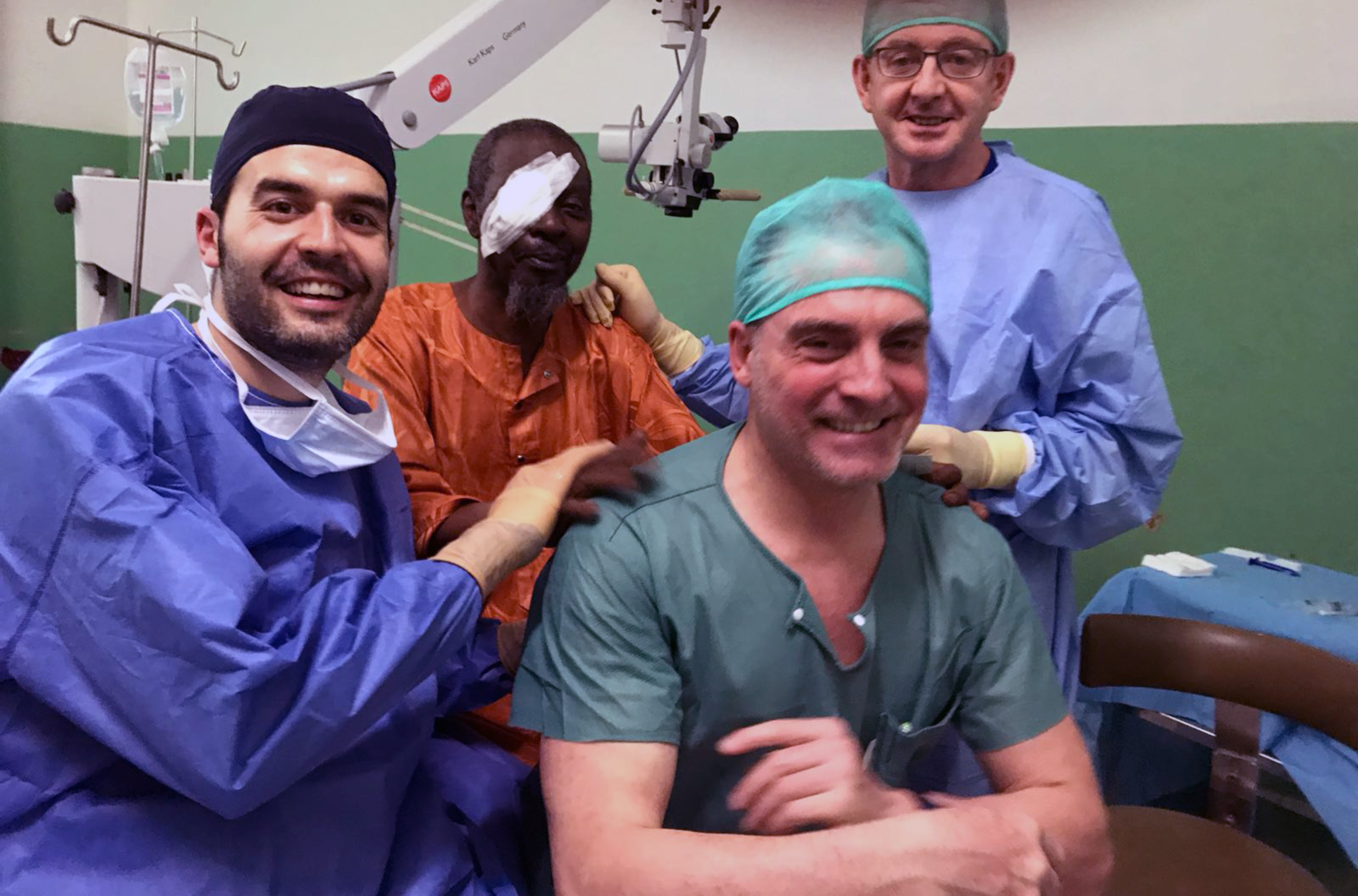 The Spanish Embassy in Guinea-Bissau, represented by its Ambassador Juan Armando Andrada-Vanderwilde, and his wife, Paloma Vizcarro, got in touch with the Fundación Fernández-Vega (FFV) a few months ago to propose the first charity expedition to this African country. The Embassy was interested in carrying a campaign against the main cause of blindness in the world, cataracts, and turned to the Foundation, which quickly established the appropriate channels to make sure that the ophthalmological care got there as soon as possible.

Thus, in March, ophthalmologist Dr Tomás Parra together with César Arias, a nurse from the Institute, and Dr Francisco Javier Rodrigo, the anaesthesiologist who has collaborated with the Foundation on this occasion, travelled to Guinea-Bissau to perform surgery at the Nacional Simâo Mendes Hospital on over 50 patients with very advanced cataracts; patients which had been previously selected by the local medical team. This patients had an average age of 45 to 55 years, “they were practically blind, less than 5%,” according to Dr Tomás Parra. “As they suffered from reversible blindness, thanks to the surgery they recovered 100% of their eyesight,” he pointed out.

As well as these surgeries, the professionals of the IOFV performed 30 complementary eye check-ups, attended two children – one with traumatic ocular perforation and another suffering from orbital cellulitis (an infection affecting the tissues within the orbit) – and provided over 100 eye glasses and sun glasses donated by the FFV.

To be able to successfully complete all this, as well as having the in situ support of Dr Lis Pulpo, of Cuban origin and resident in Guinea-Bissau, and of the local ophthalmologist Dr Seco, the team of the IOFV had to transfer all the surgical and medical material needed from Oviedo. “We needed to bring everything with us but for the microscope,” said Dr Francisco Javier. Specifically, the instruments needed to perform phacolysis (a surgical technique of cataract extraction), a statim (a portable steriliser) and a biometer to calculate the lenses, as well as everything necessary for the treatment: gauzes, dressings and even the intraocular lenses, etc.

Dr Parra rated this experience “as a challenge” due to the difficulties in performing such complicated interventions in such a short period of time and in a country with such a shortage of equipment.  “We have the great satisfaction of having been able to successfully operate over 50 individuals in barely four days,” he asserted.

Limited resources and much willingness

With all the surgical material under control, the team that travelled from Oviedo had another concern: the availability of a “certain degree of stability to be able to operate, especially regarding electricity. We were worried about power failures,” says César Arias, registered nurse, who was highly satisfied because finally there were no such complications.

The Nacional Simâo Mendes Hospital is in reality a set of several houses that hold different medical specialties with hardly any hospital equipment, thus hindering the diagnosis of diseases. Therefore, as well as clinical attention, the expedition of the IOFV took advantage of its expedition to train the Guinean ophthalmologists so that they can further their work in terms of prevention.

The Ambassador of Spain in Guinea-Bissau, Juan Armando Andrada-Vanderwilde, believes that the burning sun and the dust are responsible for the poor eye health of the population of this country, but also that “people usually go to quack doctors who make diseases worse”. There are also private clinics that, “due to their high cost, are not accessible to the majority of the inhabitants of the country,” he added.

The Fundación Fernández-Vega is willing to go back to the country and continue with an endeavour that contributes to the eye health of this population.